The oldest senior football ground in London has been bought by the local supporter-owned club and is set to become a permanent asset to the community of Forest Gate in East London.

Clapton Community Football Club completed the purchase of the historic Old Spotted Dog Ground on 24 July 2020, following a long campaign by the fans to regain their home. Clapton Community FC was established in June 2018 as a fan-owned and fan-operated community club, by the life members and supporters of Clapton FC. It now has over 1,300 members worldwide.

The Old Spotted Dog has been the spiritual home of Clapton supporters for over 130 years… but for the first time ever, they now own it. The previous owners, Star Pubs & Bars, had been looking for new tenants since last summer, when it terminated the lease held by Newham Community Leisure Ltd due to non-payment of rent. Confusingly, the previous tenant continues to field a team, called Clapton FC, most recently based in Southend-on-Sea.

The ground has been very neglected in recent years and requires significant work, which will be kick-started with a loan from Co-operative & Community Finance. When the work is complete, the restored ground and clubhouse will be available for use by local schools and community groups.

Kevin Blowe, treasurer of Clapton Community FC, said: “For the first time ever, the oldest senior football ground in London is owned by a football club, and a member-run, non-profit, community-focused football club at that. Bringing Clapton’s spiritual home back into community use, after a season of boycotts of Clapton FC home games when it was placed into liquidation by the previous tenant, was absolutely central to the motivation for setting up Clapton Community FC back in the summer of 2018. Finally having a ground of our own, owned by members, will offer long term stability for the club and also the chance to build lasting links with the local community.”

The campaign to make the Old Spotted Dog a community asset once more has been backed by West Ham MP, Lyn Brown, Mayor of Newham, Roksana Fiaz and local councillors.

Kevin continued: “We also received continuous support from the Football Supporters Association, both in terms of buying the ground as well as many other aspects of creating and running a fan-owned football club. We are incredibly grateful for everything they have done for Clapton Community FC.” 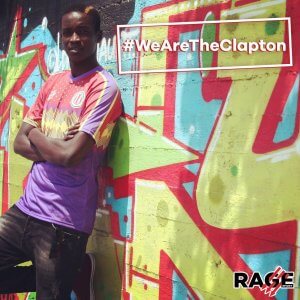 The fan-owned club has succeeded because it is passionate about equality, democracy and fairness. It encourages people of all backgrounds and abilities to get involved. The club is passionately anti-fascist, anti-sexist and anti-racist. Clapton’s away kit is inspired by the colours of the International Brigades and the Spanish Republican flag, those who fought against fascism in Spain during the civil war in the 1930s. It features the slogan ‘no pasáran’ (they shall not pass) which was used by Republican troops at the time. Photos of the kit went viral following one of their first ever games and the club sold 11,500 away shirts, including 5,500 to Spain, in its first season, instead of the 250 they were expecting.

Ian Rothwell, Investment Manager of Co-operative & Community Finance, said: “This is a fan-owned club where the politics of the club are nearly as important as the football. It has built an extremely engaged and committed membership. This is a real grassroots football club and we are delighted to be supporting it. Members include people from all sorts of different backgrounds and with that come many skills which can be utilised voluntarily. They are itching to start work on improving and developing the ground as a community asset.”